In the previous blog post we have introduced the Docker-based EaaS Desktop application and we have briefly showed how to create a new disk image and install an operating system. Since an installation “from scratch” is not always possible or desired, EaaS supports importing existing disk images from various sources.

Before we introduce EaaS image import workflows, some quick tips for working with our Docker images:

Hint: for the following examples, an updated EaaS desktop instance is required.

Importing an external image poses two difficulties for the EaaS framework: firstly, a suitable virtual machine  (i.e. emulator) has to be associated with the image and secondly, the image might require adaptation to the new hardware to function properly and sometimes to start. In order to simplify these tasks for users, EaaS provides templates representing generic computer systems and provide a valid emulator configuration for EaaS.

Some images/emulators require additional ROM files. In order to provide and use user-provided ROM files, in a first step the docker-compose.yaml file needs to be extended. Under volumes, an additional line needs to be added
- ./roms:/eaas/roms
All ROMs can be stored there. In any emulator configuration rom files can be referred to as
rom://my-example-rom.file
assuming that the roms folder contains a file with exactly that name.

To import an existing image, choose a computer system from available templates, enter the desired environment label / name (Environment Name) and provide a reference to the image file. If the value is a http:// URL the image will be downloaded. Alternatively, if only a file name is given, the image is expected to be present the import folder of the EaaS working directory. Supported disk image file formats are:

For instance, I found a MacOS 8.6 image at Vetusware, containing a HFV image and a suitable ROM file. To import the image, copy the image file into import folder and the ROM to the roms folder. Additionally, the emulator expects an explicit reference to the ROM file. In the case the line

has been added to the emulators “native config”. (For experienced Sheepshaver/BasiliskII users: this line overwrites the default prefs file.) The ROM-file name and the reference should be identical; the ROM name must not contain spaces or other special characters.

Some environments, however, are tied to their original hardware environment. For instance, an import of a typical Windows XP image will simply show a blue screen.

A generalization procedure looks for technical preconditions expected to be present on the disk image: properties such as volume label, system ID, and sets of files and directories. In the case of Windows XP, the bootable partition is identified by looking for Windows system directories. If all preconditions are met, the target partition is made available to the generalization procedures to carry out the configuration adaption. In case of Windows XP, the drivers of the storage controller will be changed to a basic, widely supported configuration (hardware generalization).

Every disk image is exposed read-only to emulators and generalization procedures, with a transparent writeable layer on top. Any changes to the disk image, either through the generalization procedure, operating system operations or manual interaction will be caught in the writable layer while the main disk image is not modified. These layers will be stored individually in the image-archive and will be applied by the system automatically. This also means that every modification is traceable and revertible. The next blog post will provide more details on working with images.

We have just added a Windows 7 template, which should work (w.r.t. hardware generalisation) with newer Windows images. For testing purposes we recommend to try Mircrosofts free test VMs. To import these images, unzip the downloaded VM. EaaS is currently not able to directly import OVA files. Fortunately, OVA files are just TAR files and can be extracted with “tar x <ova-file>”. Lookout for the extracted image file (e.g. VMDK). Remove spaces from the file name and copy/move it to the import folder. Import may take some time, depending on your machine’s disk performance, up to 30-60 minutes for such large VMs. 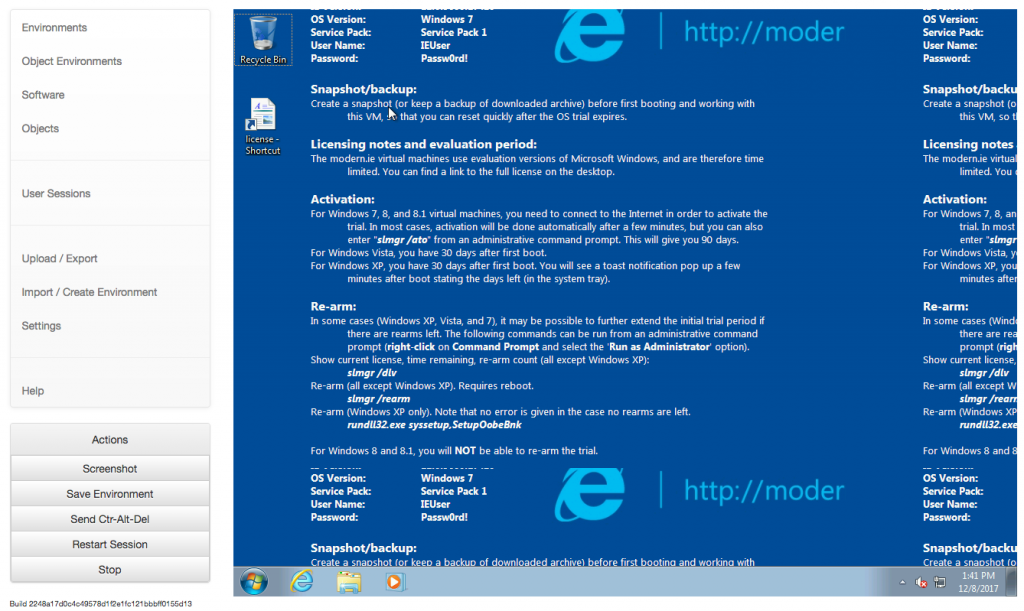 Emulation-as-a-Service (EaaS) has successfully evolved from the bwFLA project since 2011 and is now in production use. However, setting up a new instance without help…

We’ve been doing legacy disk extracts at Archives New Zealand for a number of years with much of the effort enabling us to do this work being done by colleague Mick Crouch, and former Archives New Zealand colleague Euan Cochrane – earlier this year, we received some disks from New Zealand’s Department of Conservation (DoC) which we successfully imaged and extracted what was needed by the department. While it was a pretty straightforward exercise, there was enough about it that was cool enough to warrant that this blog be an opportunity to document another facet of the digital preservation work we’re doing, especially in the spirit of being another war story that other’s in the community can refer to. We do conclude with a few thoughts about where we still relied on a little luck, and we’ll have to keep that in mind moving forward.