Emulation-as-a-Service (EaaS) has successfully evolved from the bwFLA project since 2011 and is now in production use. However, setting up a new instance without help of the developers was challenging if not painful. Thankfully, a DGF/NEH grant enabled us to work on usability, documentation and novel workflows, to enable a wider audience to use emulation.

This article describes the EaaS Desktop standalone EaaS application for Windows, Mac and Linux but is also the beginning of a mini series of EaaS/Emulation related blog posts.

The EaaS Desktop docker has been developed to run EaaS as a local application. There are no specific hardware/software requirements beside a working Docker installation (see below). Even though Docker is available for all major operating systems, there are some technical limitations on Windows and Mac hosts:

The EaaS Desktop application has been developed for test and research purposes but also to prepare content for (publicly) accessible instances. Example scenarios discussed in this and follow-up posts will cover

In order to simplify installation and deployment of EaaS, all components are made available as Docker instances. To install EaaS, first install Docker by following the installation guide for your system:

Furthermore, the docker-compose tool is required. It is automatically installed for Windows and Mac users, Linux users should follow these instructions.

Once Docker is up and running, the system is ready to host an EaaS instance. As a next step create a working directory, e.g. eaas-desktop. Within this folder create a file called docker-compose.yaml, which should contain the following content:

Finally, to run EaaS, open a command line terminal, change in to the eaas-desktop directory (the directory that have been unpacked) and run:

You should see similar to:

The log file of the server can be found in the log subdirectory of the eaas-desktop workdir.

Now, the EaaS instance is running and is reachable through http://localhost:8080/demo-ui/admin. So far, this is a fully functional EaaS instance, however, without content.

There are two options to create a new environment

This blog post will describe only the second option, import of disk images will be covered in the next post.

As a first step, the operating system to be installed needs to be ingested into the EaaS system. In EaaS terms we distinguish between environments (also sometimes called images) and objects. An environment is a combination of an emulator and typically a disk image containing an installed and configured operating system and additional software. These environments can then be used to render objects, e.g. playing a computer game, running software, rendering documents etc.). Hence, the operating system to be installed is also considered as an object, but with specific features to be exposed to the EaaS framework.

Usually, (digital) objects are maintained by dedicated object repositories. For this, EaaS provides adapters to import/export object from/to such repositories and no dedicated UI to import and/or maintain objects. In the default desktop version, digital objects can be maintained manually through a simple file system structure. To make digital objects available within the EaaS framework:

Available objects will be listed under: http://localhost:8080/.

Note: If you added an object while EaaS was running, the contents of the object archive need to be reloaded. Click “Settings” – “Sync Object Archives”.

To use an object as software or operating system, some additional meta-data is required. The demo-ui provides a simple workflows for this task. Click the “Software” link to see the list of available software.

To promote an object to a software object, click “Add new Software”. In the next step an object can be selected and additional metadata can be added. Tick Operating System to indicate this object as an installable operating system. This implies that the object’s file (e.g. ISO or floppies) are bootable. You may also choose a preset for this operating system, i.e. add the OS’s rendering capabilites. In case of MS DOS, the presets will add x-fmt/409 (MS-DOS Executable). This information will be available during object characterization, e.g. if an object contains MS-DOS executables, all environments with an installed MS-DOS operating system will be suggested. 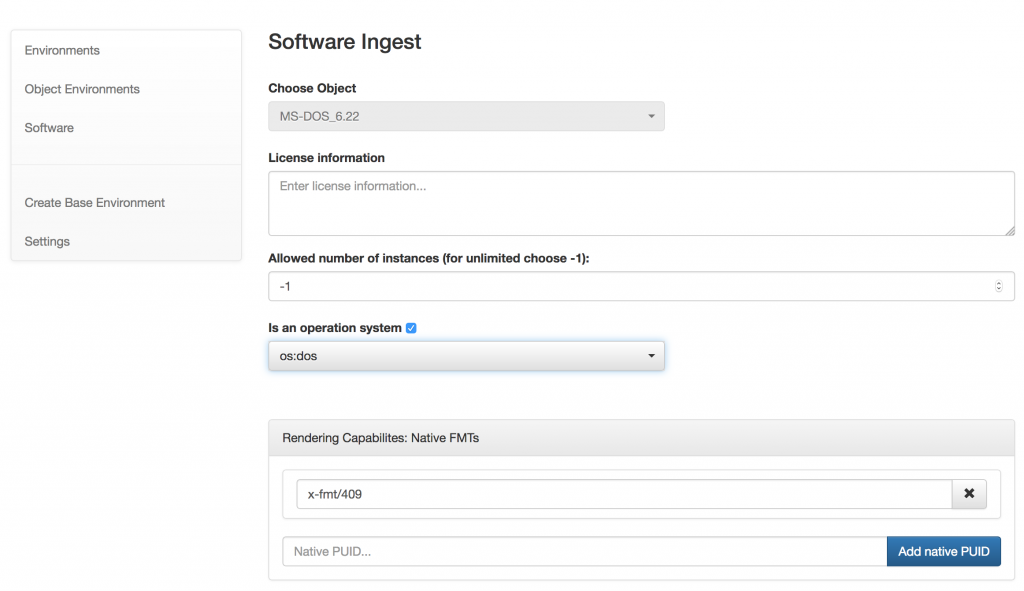 The objects should than contain MS-DOS_6.22 subdirectory with the following structure:

Then add the MS-DOS as a software / operating system object and install:

Play with the EaaS Desktop application and populate your image archive. The upcoming blog posts will cover more (digital object related) workflows. If you do not want to wait, take a look at the EaaS Documentation.

bwFLA’s Emulation-as-a-Service makes emulation widely available for non-experts and could prove emulation as a valuable tool in digital preservation workflows. Providing these emulation services to access preserved and archived digital objects poses further challenges to data management. Digital artifacts are usually stored and maintained in dedicated repositories and object owners want to – or are required to – stay in control over their intellectual property. This article discusses the problem of managing virtual images, i.e. virtual harddisks bootable by an emulator, and derivatives thereof but the solution proposed can be applied to any digital artifact.