In this Blogpost I want to examine the findings of two validation tools, JHOVE (Version 1.14.6) and Bad Peggy (version 2.0), which scans image files for damages, using the Java Image IO library. Goal is to compare the findings and enable the reader to know what to expect from these validation tools for the daily digital curation work.

This test was done with the publicly available Imagetestsuite from Google

. Furthermore, I included pictures from events like Christmas parties and outdoor events in my library from the last 6 years, pictures contributed by friends and colleagues, some of my own pictures, and even some memes from public fun Facebook pages like “useless facts”.

In one case, I even opened a JPEG in an editor to remove some bytes to test if the tools would realise that something was wrong, hoping I would get error messages that were still missing from the list (which, by the way, worked out).

All in all 3070 JPEG files were tested. In the following, I will focus on the files that either the JHOVE

– or both – found objectionable in one way or the other.

In this table there are listed the JHOVE errors only. All errors found by Bad Peggy in the sample are in the table below the conclusion.

Let’s take a closer look at the different errors:

General information about the JPEG structure

Between the SOI (Start of Image) and the EOI (End of Image), there are other segments allowed, roughly said the structure of a JPEG should be as following:

If there are e. g. embedded thumbnails, it is also possible that a single file can have more than one SOI- and EOI-segments. In these cases, the JPEG has to have a SOI segment between two EOI thumbnail markers. (Bad Peggy checks this, whereas JHOVE does not.)

Furthermore, the Bad Peggy error “corrupt data: xxxx extraneous bytes before marker 0xd9.” goes unnoticed by JHOVE. Images in this sample with these errors, though, do not look healthy to me at all.

Jhove detects that there is something wrong with these images (“Unexpected end of file“):

JHOVE does not detect that these images are damages, though Bad Peggy does (“corrupt data: premature end of data segment“):

There is clearly something missing, as you can see with these three examples, which are considered to be valid by JHOVE:

As a digital archivist, I would want to know about these errors while ingesting data. I fully agree with Bad Peggy – this data is indeed corrupt. I consider this as a false negative finding of the JHOVE JPEG module: The JPEG has serious problems, but JHOVE does not detect them. In this case, Bad Peggy is the better Sherlock Holmes.

The last Bytes of a JPEG should look like this and always end with and EOI (end of image), which is “FF D9”:

In this example, the JPEG just ends without the necesary EOI:

If I add the “FF D9” manually and save the file, JHOVE does not detect that something is wrong with it any more. It considers the file to be valid & well-formed.

Bad Peggy, however, still considers this file to be invalid:

Easy and straightforward: Both tools check the JPEG header and throw an error if there is no correct JPEG header. This is extremely useful, as tools usually cannot open files with a missing JPEG header. In most cases the file is unreadable for good – or it’s not even a JPEG in the first place.

JFIF APP0 marker not at beginning of file

After the SOI (“FF D8”), an APP0-segment should follow, which always starts with “FF E0” (see: “General information about the JPEG structure”). If this error is thrown, the APP0-segment does not follow directly after the SOI-segment. A JPEG file which throws this error viewed in a Hex editor shows that the  SOI marker “FF D8” is not followed by “FF E0”. Instead, in this example the SOI-marker is directly followed by a copyright marker (“FF EE”).

JHOVE flags this file as missing the APP0 marker; Bad Peggy, however, completely ignores this error and obviously does not test it. The JPEG standard clearly states that JPEG files have to be structured like this, but so far, none of the JPEG files of the sample have caused any problems in commonly used viewers. This cannot be marked as a false positive for the JHOVE JPEG module, but currently does not seem to bear any practical risks for the affected data. As usual, the viewers are more flexible than the file format standard, at least contemporary viewers (we cannot guess for future viewer, however, which makes the decision for long-term-availability harder).

Marker not valid in context

The examples in the corpus are all visibly corrupted, as parts of the images seem to be missing:

The JHOVE error sounds pretty general. For the three examples in the corpus, Bad Peggy has found different equivalents.

This error occurs several times within the sample and gives a plethora of marker bytes which have been used instead of 255. So far, none of the affected JPEGs have shown any problems and Bad Peggy ignores the error altogether.

File does not begin with SPIFF, Exif or JFIF segment

A JPEG file usually uses the graphic format JPEG Interchange Format (JFIF), but can also use Exif or SPIFF

– but obviously has to start with one of these three segments and no other. Bad Peggy marks these files as invalid as well, but the error message is quite tight-lipped “ype.” – which was translated by the KOST

(Switzerland) as something like “This JPEG contains characteristics that are not supported” – which does not really enlighten me.

Similarly to the example for the JHOVE error “JFIF APP0 marker not at beginning of file“, the tag directly following the SOI (“FF D8”)-marker is not a JFIF, Exif- or SPIFF-marker, but a copyright tag (“FF EE”).

Bad Peggy also detects an error that is completely ignored by the JHOVE JPEG module, which Bad Peggy has found for more than 100 files within the sample. This error is almost self-explanatory, knowing what an SOI (start of image) and EOI (end of image) is. So far, none of the JPEGs look bogus in any way or had any problems to be displayed.

After a closer look at the affected JPEG data I would not want these JPEG files being unnoticed in my archive: 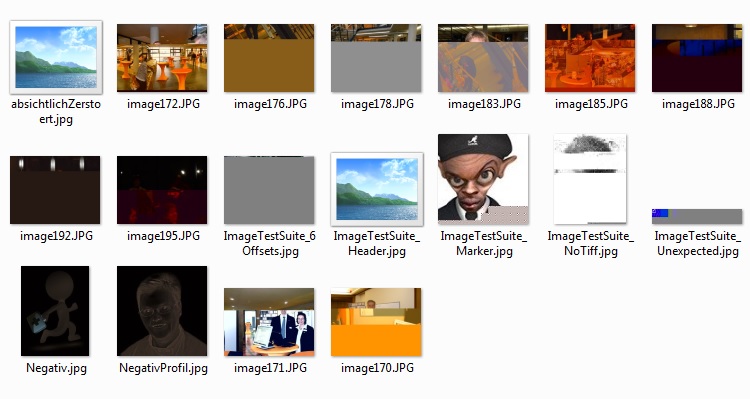 Two of the images cannot even be opened and displayed any more and the rest has missing parts, mixed up parts and colour problems. For practical reasons, I would want my tool to detect the errors automatically and not necessarily more than those. These are the only JPEGs that obviously have problems, others show errors in JHOVE or Bad Peggy or both, but contemporary JPEG viewer tools have no problems displaying the JPEGs. Of course it is impossible to say if future tools will be able to display these JPEGs properly.

Considering this, Bad Peggy has clearly won: It detects all of the visually corrupt images.

The JHOVE JPEG module misses 7 out of 18 – which is the Bad Peggy error “corrupt data: premature end of data segment” without the additional error “corrupt data: Truncated File – Missing EOI marker” and “xxxx extraneous bytes before marker 0xd9.” Maybe JHOVE would be just fine if these two extra tests would be included. If there is seriously other stuff missing – well, maybe we’d need a bigger sample to examine to be able to answer this question.

These seven JPEGs with visible problems are missed by JHOVE: 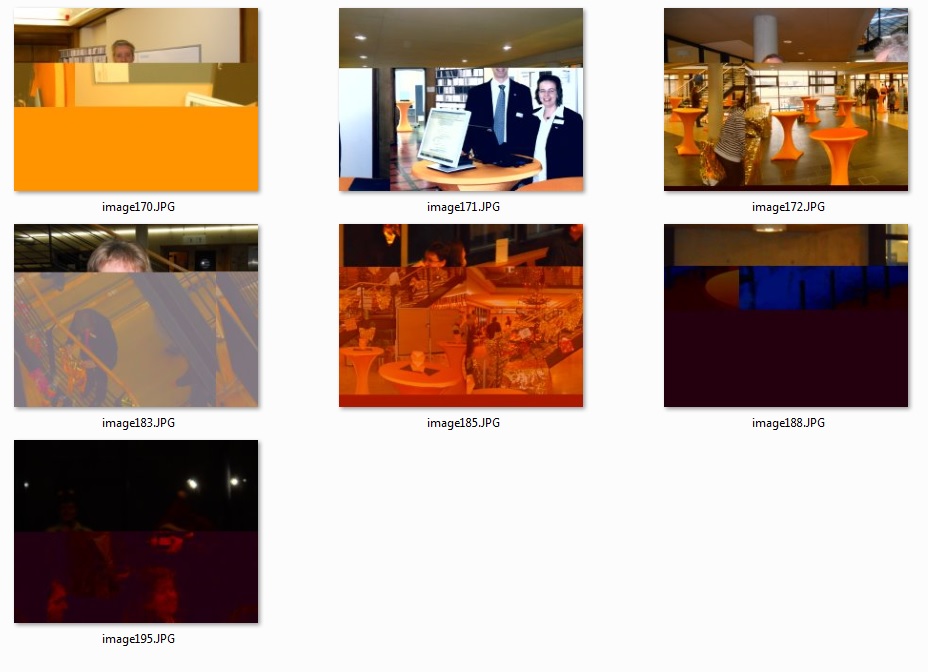 All errors found by Bad Peggy

All in all 1007 files in the 3070 sample had problems, if Bad Peggy is to believed. As one file can contain more than one error, the findings are as follows:

Motivation As most of us rely on JHOVE for file format validation, it is important to gain information about the quality of JHOVE’s validation skills…