A little while ago I introduced a new file format identification tool, siegfried, on this blog. Since then, I’ve been refining the tool, with a goal of a 1.0 release early next year (probably around March). I hope you don’t mind the occasional update about my progress on this blog.

One of my goals with siegfried is to make a tool that has decent performance characteristics but that, in its default mode, faithfully applies PRONOM signatures. What this means in practice is that, if siegfried needs to scan an entire PDF file to determine whether a PDF/A marker is present it will do so, even if this slows identification. This is how I like to do format identification (favouring comprehensiveness and accuracy over speed) but I’m aware that other use cases warrant different tradeoffs.

Both DROID and FIDO allow users to tune the matching process to satisfy these, and other, use cases. For example, users of DROID can control the number bytes scanned. Users of FIDO can also limit buffers as well as apply a number of other customisations including adding custom signatures, excluding signatures, excluding extension matching, etc.

The latest version of siegfried includes a number of signature customisation options, such as:

These options aren’t in the sf tool but are in a companion tool, roy. This is the tool that builds siegfried signature files. For example, the command:

builds a custom signature file with maximum beginning of file and end of file offsets. When used with the sf tool, the output looks like this:

The benefit of hardcoding customisations in this way is that the signature file becomes a fixed record of those decisions. This makes it easier to track the basis of identifications, apply customisations consistently, and share customisations.

The main reason for supporting multiple identifiers is to prepare siegfried to support additional signature formats (such as those used by the file tool). But this is a long way off (and not a version 1 feature!). In the meantime, you can do interesting things with multiple identifiers just using PRONOM signatures.

Multiple identifiers are also useful for tracking changes to PRONOM signatures over time. These commands:

create a signature file that has the most recent DROID signatures (version 79) as well as two older versions (versions 10 and 35). The -noreports and -nocontainer flags are necessary because I’m building directly from the DROID xml file here (not from XML reports from the PRONOM database) and don’t have matching old container files for those versions.

When matched against a file, the output looks like this: 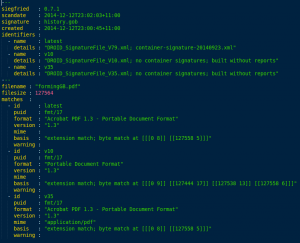 All three versions of DROID correctly identify the file as fmt/17 but they differ on basis – in the different offsets reported we can clearly see how that signature has changed over time.

There’s lots more you can do with roy’s signature customisation and multiple identifiers. For a full description of the options, please have a look at this page on the siegfried wiki.

This is the second and final instalment of a 2-part blog on the use of PDF/A validators for identifying preservation risks in PDF. You can…

NL-menu was the first Dutch web index. The site was originally founded by a consortium of SURFnet, Dutch universities and the KB. From the mid-nineties…

Ok. I know what you’re thinking. Do we really need another PRONOM-based, file format identification tool? A year or so I might have said “no”…