On 7 December, I attended the launch of the Connecting Europe Facility (CEF) Building Blocks in Brussels. I was there on behalf of OPF – we are participating in the E-ARK4ALL consortium who are working on the eArchiving Building Block.

This was the second event from the CEF introducing the three new Building Blocks (Big Data Test Infrastructure, Context Broker and eArchiving) and providing updates from the established Building Blocks (eDelivery, eID, eInvoicing, eSignature and eTranslation). The event was moderated by Jennifer Baker and it was attended by over 130 participants from 35 countries.

Andrea Servida, Head of Unit, eGovernment and Trust at the EC, welcomed participants and set the scene for the day. The purpose of the event was to learn more about the new Building Blocks, take stock of the established Building Blocks and discuss opportunities for the organisations to work collectively to address the challenges ahead. He noted that the digital landscape is constantly changing and the EU is taking a more proactive approach to address this through the first programme that is purely dedicated to digital. The Building Blocks aim to provide reliable services that offer a similar experience across different domains and work seamlessly across borders. The programme aims to bridge the gap between citizens, community and government.

First up was BDTI. It enables users to be able to discover, access and share big data in a standard way to facilitate data-driven policy making in public administration. The Building Block provides links to data sources, infrastructure, tools and best practice advice. 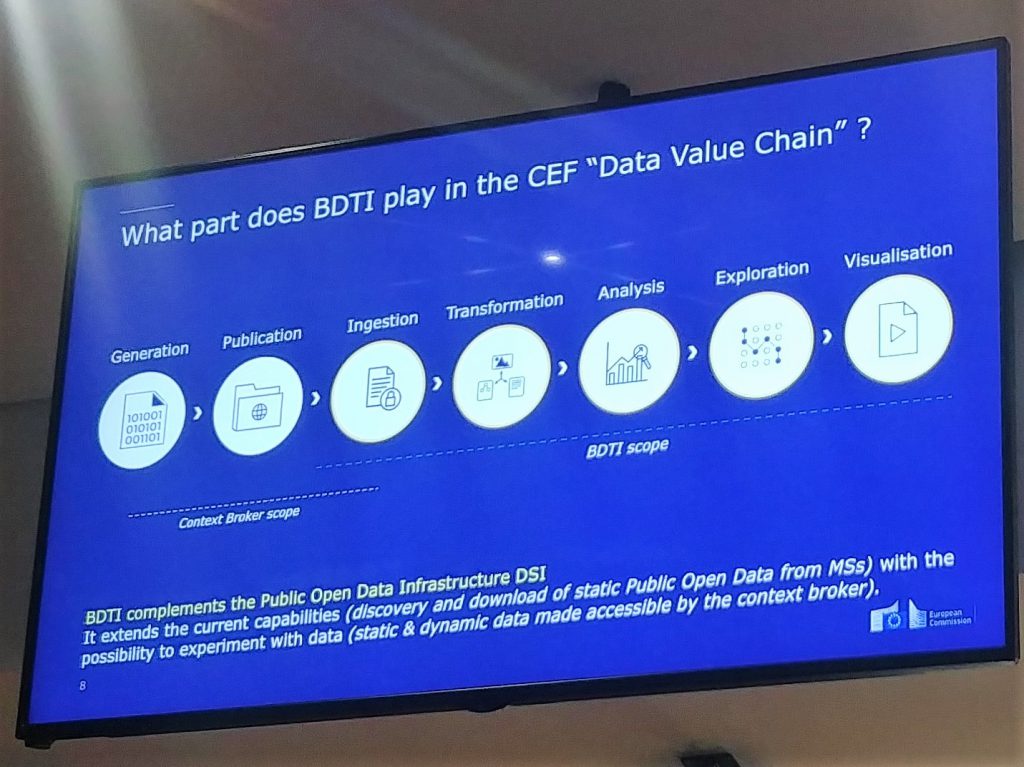 The BDTI Building Block is creating an ecosystem that covers whole data value chain and has the potential to link to the other Building Blocks such as the Context Broker.

They have created a cloud-based sandbox to simplify how users can test it – to try fast and succeed or fail fast. If the tests are successful they can be exported to a production environment.

BDTI is based on open source standards and technology. The platform contains over 800k datasets from across Europe. It allows users to combine data from different source sources (e.g. big data, open data and internal data), regulate the differences and then generate and publish new data.

Find out more about BDTI

Different technical interfaces, data models and regulations often prevent the exchange of data. The CB aims to provide break down these silos of information to provide real-time information describing what is currently happening in a particular context.

The CB is managed by FIWARE, a not for profit foundation. Their CEO, Ulrich Ahle, noted that the CB technology is currently being used by 120 cities across 20 countries. Ahle explained that Helsinki has used it to create a smart city platform. As an example, the platform can monitor how many people are using a bus by use of their payment through a  smart card, know whether the bus is on time and can ensure that the traffic lights are green to allow it to catch up on the timetable. In the city of Vienna, users can track car sharing opportunities or find out where emergency services vehicles are in real time, access live cameras and see the traffic. In Eindhoven, the CB has been used to help reduce police incidents on streets with lots of bars. The technology monitors the movement of people without and analyzes sound patterns and volume (but without facial or speech recognition so it does not record personal data) to predict critical situations in the area. The police can use the information to decide whether to attend, but have found that increasing the level of light in the area is often enough to prevent an issue escalating. 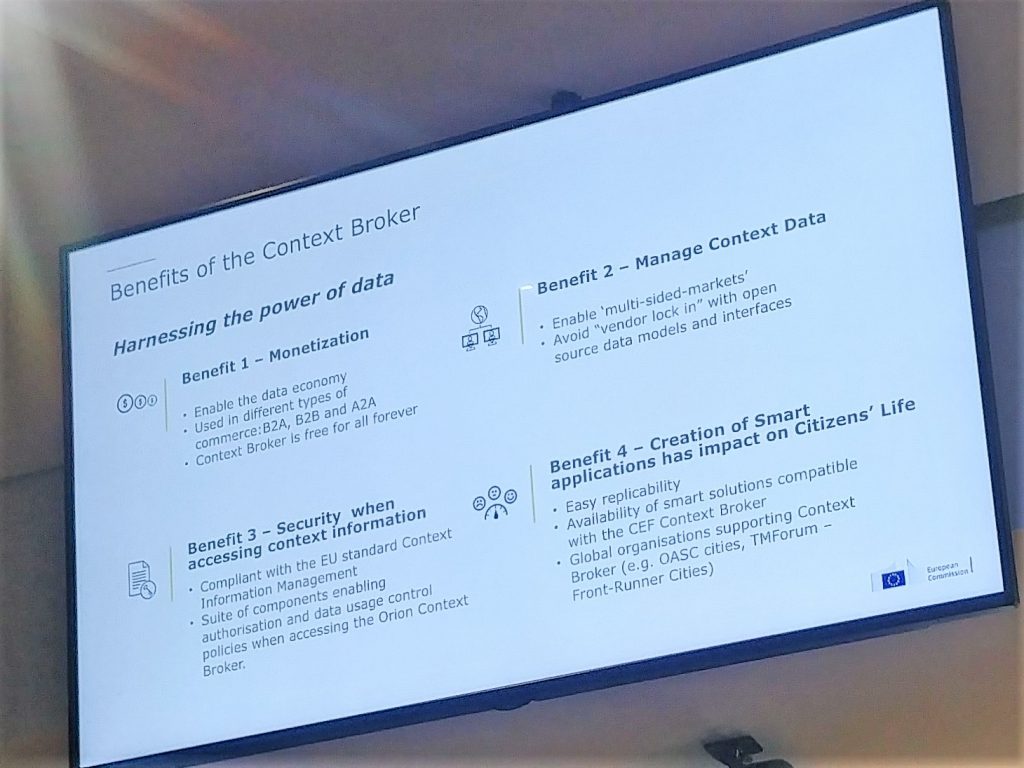 All information is described in the same way with open APIs and the technology is open source.

Find out more about the Context Broker

The E-ARK4ALL consortium presented the eArchiving Building Block. This was the only panel of the day that was not an all-male panel.

Janet Anderson explained that the eArchving Building Block is based on the EC FP7 E-ARK project. National archives got together to meet the challenges of new e-government legislation and the new environment of a paperless office. Government administrations want their data to be accessible now, and available and kept safe for the short, medium and long term.

It sounds a simple concept but in practice, it is more complicated as it involves a range of data types from different member states. It is not just national archives that face these challenges – smaller archives, businesses, and personal data is important and it affects different sectors such as healthcare, finance and environment agencies. The E-ARK4ALL consortium is enhancing the outcomes from the E-ARK project. These are robust solutions developed and piloted by national archives across Europe. If you cannot trust your national archive, who can you trust? 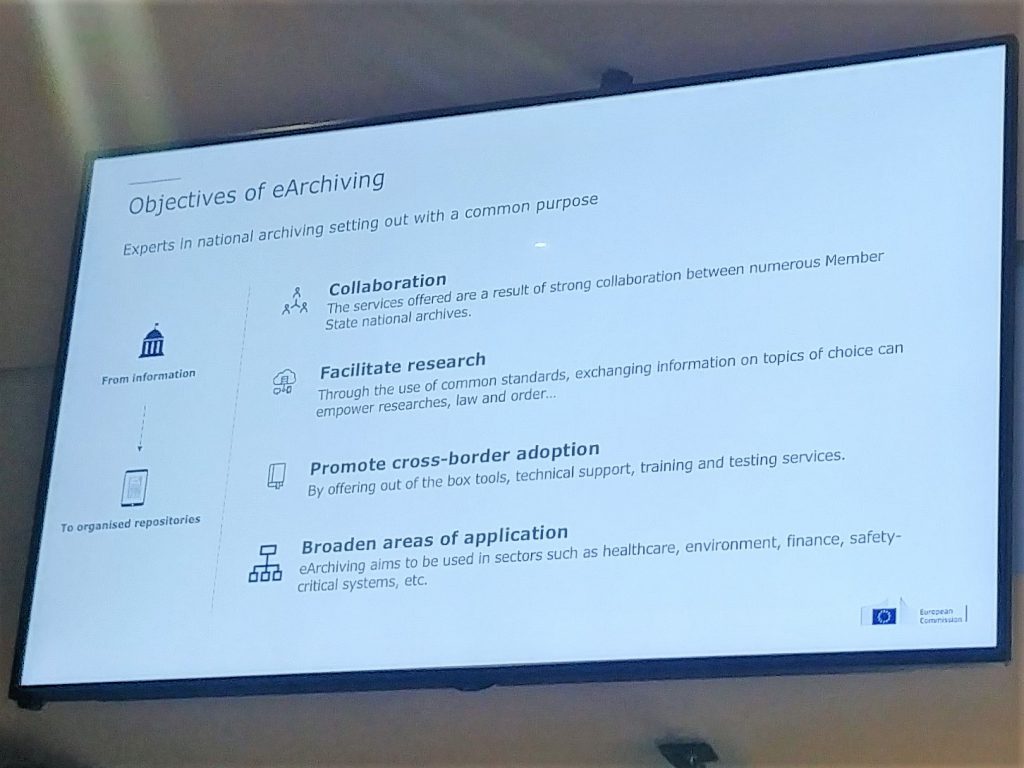 E-ARK4ALL is connecting with subject specialists to develop the relevant specifications e.g. eHealth. The consortium has developed tools that are harmonised around the specification accompanied by a sample software portfolio for testing. The outputs follow a modular approach so organisations can choose what suits their use case best. They can also be integrated into existing systems including proprietary systems. The helpdesk is up and running and the specifications, methods and tools are well documented.

Find out more about eArchiving

After lunch, the four established Building Blocks each gave a lightning talk on their experiences of the programme:

eDelivery supports the secure and reliable exchange of data and documents. It sends messages in a secure way with dynamic addressing. It uses the AS4 implementation guidelines defined in the e-SENS Large Scale Pilot. Organisations can install an open source access point to exchange information with the AS4 messaging protocol. The project was up and running just three months after starting. In Sweden, a strategy report is being written about how they will implement it on a national level. It can be used cross-border but right now it will have an important national benefit and that work will make cross-border interaction easier.

Find out more about eDelivery

eTranslation carries out machine translation on an automated platform. The Building Block work has evolved from the previous system which gave public administration some access, but not much. 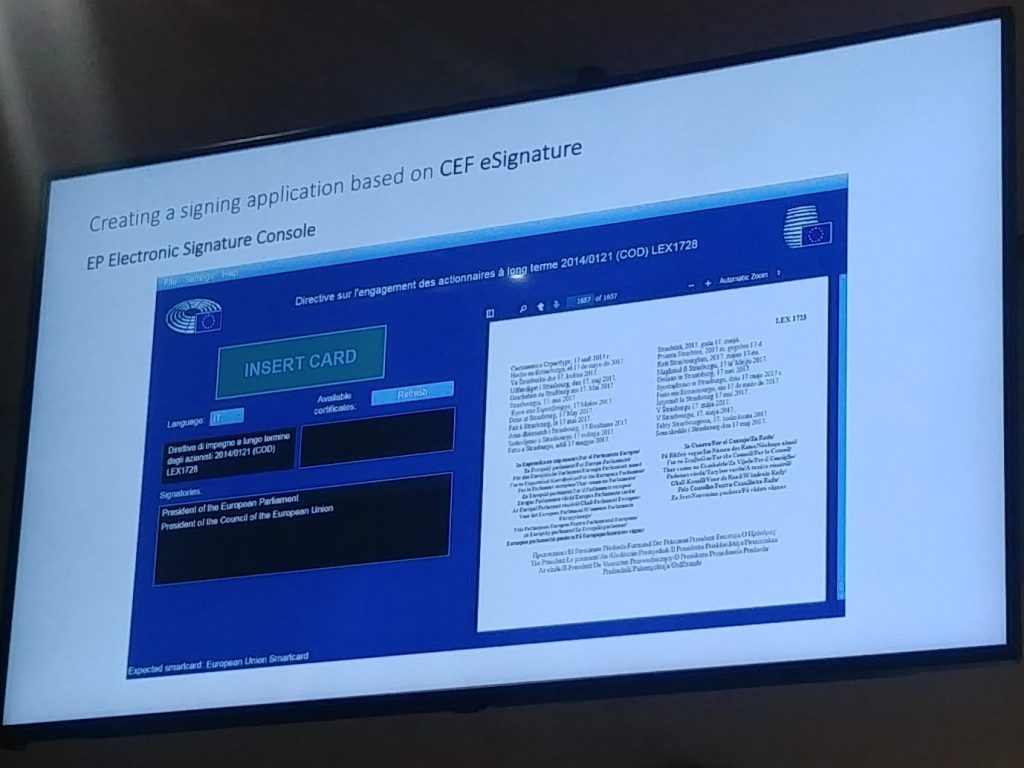 They have received over 5 million requests for eTranslation this year ranging from one-page documents to several hundred-page documents. There have been 37 million eTranslations carried out to date, the target is 40 million for the year end.

The platform has several use cases. It is run in the background of the European Data Portal. It’s not visible to end users, but it harvests data and translates it supporting multilingual searches on the website. It is used in the online dispute system to allow basic complaints to be translated. If the complaint is more serious or involves a requirement for significant legal advice they rely on human translation. There are currently no systems at present that are fully automated. Its primary use is to be integrated into digital services, however, it can carry out stand-alone translation of documents.

The system is focused on legislative language and it performs better than generalist language translators in this area. They now need broader data and other specialist information to expand the system.

Find out more about eTranslation 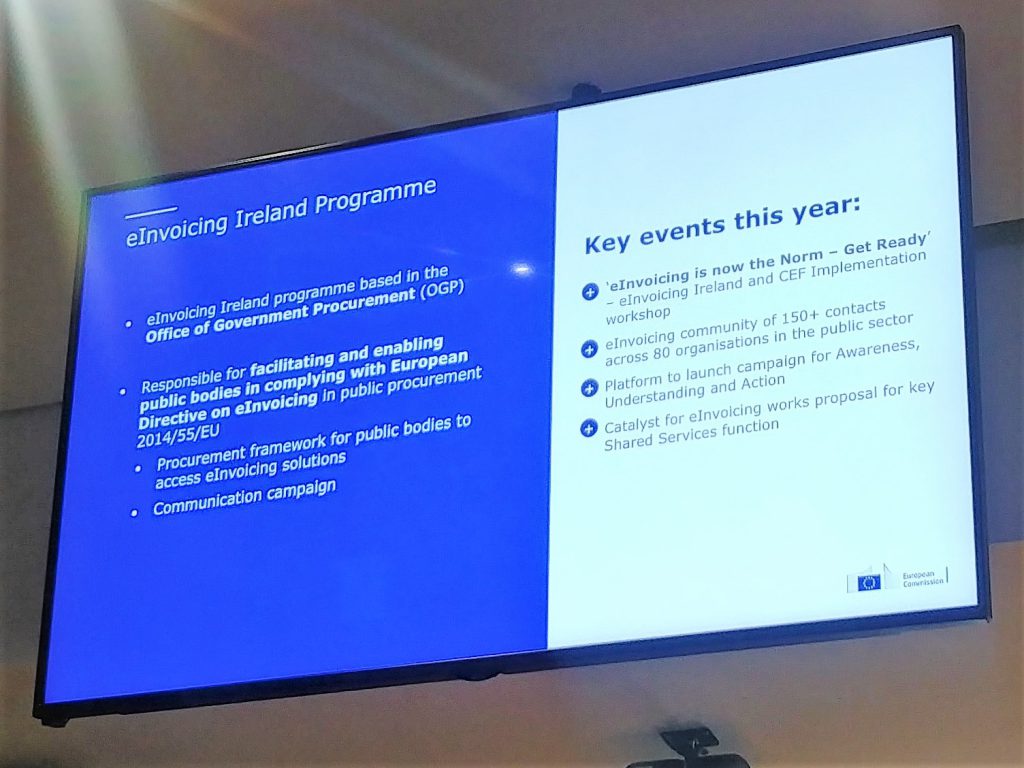 The eInvoicing Building Block comprises several components: legislation, specifications, tools to test compliance, and online resources. In Ireland, the Office of Government Procurement has been responsible for setting up and implementing the programme. Acceptance of eInvoices by governments makes it easier to carry out transactions in the public sector. There was quite a low adoption rate when the Building Block was first set up. A core part of their work was to raise awareness about the benefits and support facilitation of its use. Today, eInvoicing is accepted as the norm in Ireland. The credibility of the CEF programme and European context has helped to drive the level of interest and take up.

Find out more about eInvoicing 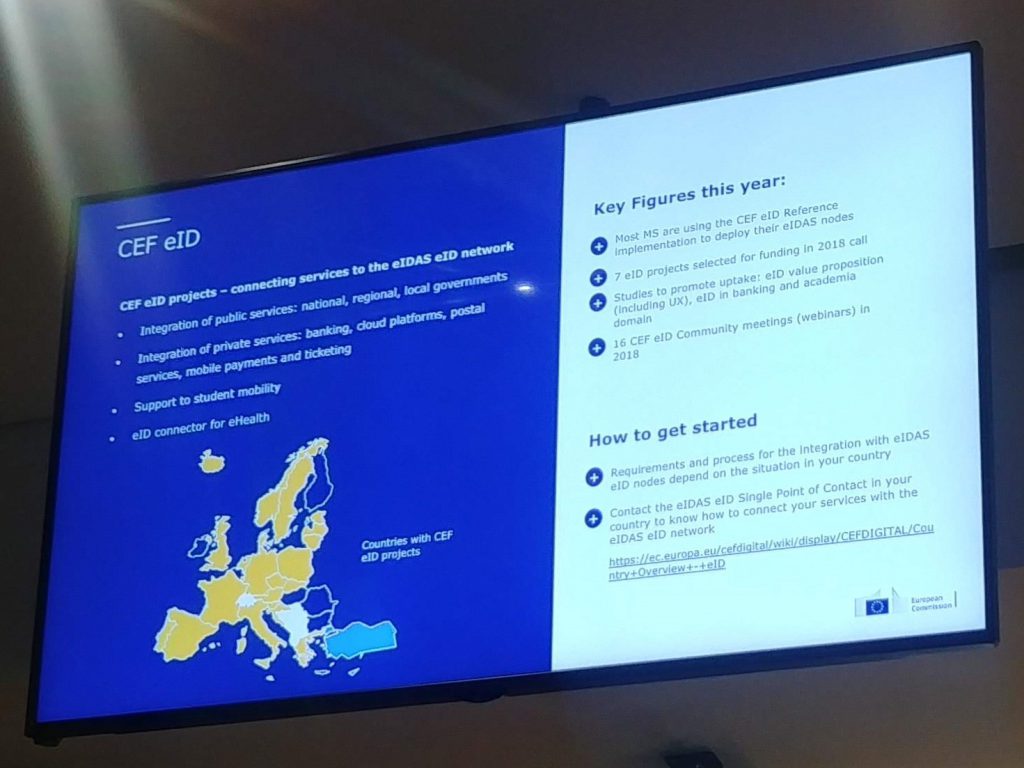 eID supports European citizens to use public services in different countries. It is realised through a set of nodes based on the eIDAS Network; most member states have a chosen reference implementation

They have conducted studies to capture the benefits for different user groups e.g. academics, to define what their needs are and document the value proposition to promote adoption.

Find out more about eID

The eSignature portal allows internal documents to be signed in Parliament. It was first used in 2017 to electronically sign a European Directive. It represents a huge leap for IT and legal services. The Estonian government had a strong business case for eSignatures. Estonia operates in a highly digital way, for example, citizens’ documents are issued electronically. If they travel to another European country they are asked for their papers, which are expensive and time consuming to produce.

The technology is based on an open source library. It is compliant with PDF standards as well as the requirements for the signature itself. One technical challenge they have faced is having one document digitally signed using 4 different smart cards. The real challenge, however, is legal, rather than technical.

Find out more about eSignature

Representatives from each of the Building Blocks joined together for the final panel of the day. They reflected on the talks from the day and answered questions from the audience. Each panellist agreed they see value in the other Building Blocks and have gained a better understanding of how they are related. For example, a legal document with an eSignature must be archived for 25 years.

The established Building Blocks shared some lessons learned with the new ones:

All the slides are available here.

The launch was filmed throughout the day. I was really impressed that the highlights were edited, set to music and presented back to the audience to close the event.

In 2018, with the support of the Connecting Europe Facility (CEF), the new eArchiving Building Block was launched. On the 3 – 4 December, the…

The European Commission is hosting a CEF eArchiving event on 3-4 December in Brussels. Meet eArchiving offers the unique opportunity to learn how eArchiving can…

About a year ago, work started on packaging SCAPE tools. Jpylyzer was the first SCAPE tool that was turned into a Debian package. Some time…